Finding the Root of your Weight Gain 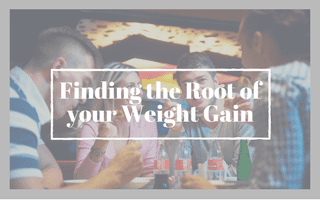 Without knowing the root of your weight gain in the first place, it’ll be pretty hard for you to do much about it. Before you can make a lasting change, you need to have an understanding of how you ended up where you are in the first place. Once you have a clearer picture of the important factors influencing your weight, you can formulate a course of action to lose weight successfully & maintain it long-term.

At the end of the day, yes, weight gain and loss comes down to an imbalance between energy in and energy out. But there are a lot of factors that come into play in this equation, such as your ancestry, environment, and lifestyle choices. By uncovering the root issues of your personal weight problem (I hate calling it a problem because it sounds accusatory but I lack a better word), you can figure out whether you should be prioritizing additional exercise throughout the week or whether that time would be better spent sleeping or destressing.

Here we’ll look at 7 common factors that may be contributing your carrying around excess weight. This is not an exhaustive list but is a great place to start.

Genetics is a factor here, as studies suggest that having an overweight parent (or 2) doubles the chances of their child becoming overweight, as well. That said, you are not your parents and your genetics do not resign you to a life of obesity. You might simply have to pay more attention to your eating than does someone with more favorable (in this regard) genes.

Regardless of genetics, your parents played an influential role in your childhood, as well (is that the most obvious sentence I’ve ever written?). By that I mean, your habits, preferences, and tendencies have all been influenced by your parents.

If you were a member of the Clean Plate Club as a kid (member here, as well), you may have a hard time leaving food on your plate as an adult – even when you’re no longer hungry & no one is making you continue eating.

If your parents played outside with you every evening after work, you’re probably a lot more inclined to be active now as an adult than someone whose family bonding was mostly over sedentary activities.

Several studies have shown that sugary drinks like soda can contribute to weight gain. The most obvious reason is that drinking calories instead of eating them does nothing for your hunger levels so it’s easy to eat the same amount as you normally would, rather than cutting back on food to compensate for the calories from drinks. There’s also some evidence that soda can impact your sense of hunger and decrease your sense of fullness (and not in the direction you want).

If you’re someone who drinks a large amount of soda as is, switching to diet may be a great step in the right direction but something to consider is that artificial sweeteners may condition your body to crave more sweet foods/drinks. If you’ve already made the switch to diet soda, it might be worth paying close attention to whether you notice a correlation.

While exercise alone isn’t a great way to lose weight, the combination of dietary changes & increased exercise will make you very successful. Being active is one of the factors that people who’ve lost a significant amount of weight and successfully kept it off, have in common.

How much exercise? Well that depends on how much you’re getting now. If you’re totally sedentary with a desk job & quiet hobbies, just getting moving is a great step (pun intended) in the right direction. Once you’re moving consistently, shoot for at least 30 minutes of moderately intense exercise each day. If you’re already doing that, experiment with increasing time, intensity, and type of exercise.

Need help figuring out where to start with exercise? Download your copy of the Body Transformation guide! It has 30-days of at-home workouts!

Lots of studies suggest that excessive (more than an hour per day) TV watching increases your chances of becoming overweight. But what’s even more interesting is that this applies to active women, as well! So it’s not necessarily as simple as more TV = less active. Yes, it may be exactly that simple: watching TV is taking the place of more physically demanding activities. But there could also be more indirect factors at play here, such as the fact that we tend to eat while watching TV & generally the things we’re eating aren’t of the healthiest variety.

If you’re a big TV watcher (and, yes, Netflix counts), think about why you watch so much. Occasionally binge watching your favorite show as soon as it comes out isn’t as big an issue as habitually zoning out in front of the tube to avoid your family and ignore stressors or when it cuts into your sleep time.

Great segue by me, huh? We all know that sleep is important but when push comes to shove, we’re more than willing to sacrifice an hour or two. Researchers are still working out the relationships at play here but there are several theories.

A couple of the more obvious theories are that a lack of sleep mean you’re tired and when you’re tired, you’re probably less active & therefore burning fewer calories. Being awake longer gives you more opportunities to eat and when those midnight snack cravings hit, they’re probably not for carrots & hummus. Less obviously, important appetite-related hormones may also be impacted by a lack of sleep.

If you’re the up-until-midnight-and-back-at-it-at-5am kind, don’t just ignore the importance of sleep. If you knew that sleeping more would help you lose weight, you’d do everything you could to make it happen, right?

Much like we commute without much thought and go through the motions at work day after day, we also don’t pay much attention to what & how much we’re eating, whether we even want it, and how much we like it. We’re influenced by things like portion size & who we’re with.

The book Mindless Margin by Dr. Brian Wansink is a great read about a lot of different experiments that looked at this exact topic. Mindless eating can very easily cause us to overeat but that once we’re aware of these outside influencers, not only do be become more mindful of them, but we can actually use them to our advantage in an effort to mindlessly eat less.

Your immediate environment may well be providing barriers to your lifestyle improvements. Living in a neighborhood in which you feel unsafe going outside makes it a lot harder to be active. Not having a grocery store within 50 miles makes it pretty hard to eat healthy foods. Those may seem like extreme examples but for many people, that’s reality.

More commonly, though, your job or friends & family may be the negative influencers. If you’re constantly stressed about work or work such long days that you have no time for yourself, changes are going to be harder to make. When your friends & family aren’t supportive and are constantly pressuring you to have “just a bite” or “indulge a little” it can be hard to maintain resolve.

The root cause of your weight gain isn’t necessarily limited to one (or several) of the factors above. You may have other, more personal or less common influencers such as a history of abuse or lack of self-worth.

If you suspect this is the case, I encourage you to be honest with yourself. Do some journaling in an effort to uncover these attitudes or thoughts. After all, awareness is the first step toward breaking the cycle.

You need to first become mindful of how you ended up where you are before you can successfully move forward and change your weight and your lifestyle for the better. Once you’ve identified your root causes, I suggest picking one thing at a time to improve.

I know it’s appealing to want to fix everything at once! You’ll likely be more successful by making small & sustainable changes, one-at-a-time, and stacking them upon one another until you’ve made a massive change to your health & your lifestyle!

Start by downloading your copy of the Body Transformation guide! It includes tips on how to become more mindful when you eat, what & how much you should be eating, what types of workouts you should be doing, and more!

Questions, comments, concerns? Reach out to me here!

This site uses Akismet to reduce spam. Learn how your comment data is processed.

Get to know Esther

I am a certified nutrition coach and personal trainer who aims to help you cut through the BS and simplify your approach to healthy living so that you can love the person staring back at you in the mirror and be there for others who need your help, love, and compassion.