2 Foods To Give Up (If You Want To Lose Weight) 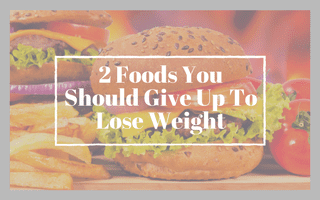 It seems like everywhere you turn, someone is suggesting that you have to give up _____ if you want to lose weight.

“Foods that start with the letter ‘P’ are the devil.”

“You need to stop eating solid foods after 6pm EST.”

“Low-fat is where it’s at.” (Diet rules are doubly effective if they rhyme).

“Watch out for those egg yolks.”

Sure, people often have compelling personal successes with whatever they’ve done. But I want to touch on a couple of things here:

Ultimately, there are no foods that will make it inherently impossible to lose weight. In fact, an overly restrictive diet maybe be one of the reasons that yours isn’t working for you.

That being said, there are 2 foods that I encourage you to eliminate if you want to lose weight & get healthier:

(If you don’t know which, if any, foods are causing you physical discomfort, purposeful + temporary programs like Whole30 can help you gather information about how certain foods impact you. Programs like these are helpful because the initial elimination phase is to remove foods from your body in order to see the effects of their reintroduction).

Note: your relationship with a food may differ depending on the situation. For example, you might be totally fine having just a handful of chips & guac (instead of the whole basket) whenever you get Mexican food but having them in the house is a different story.

Remember, also, that your relationship with foods can change. Just because you have a hard time eating a certain food in moderation right now doesn’t mean that it will always be that way.

But right now, if you’re unable to eat a certain food in moderation, it may make sense to just not eat that food for a while (even just in certain circumstances). It doesn’t mean you can never eat it again, it just means that right now you are choosing not to.

So tell me, if you gave yourself permission to ease up on the foods that are “forbidden” and instead only eliminated foods that fit one of the above criteria, what would that look like? Head over to my free Facebook group, Live Diet-Free, and let me know!

This site uses Akismet to reduce spam. Learn how your comment data is processed.

Get to know Esther

I am a certified nutrition coach and personal trainer who aims to help you cut through the BS and simplify your approach to healthy living so that you can love the person staring back at you in the mirror and be there for others who need your help, love, and compassion.